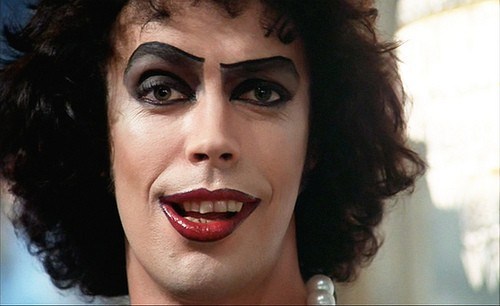 Tim Curry has the perfect voice for evil. The other day, someone in my family posed the question of whether he ever plays anything except the villain. It seemed like a joke at first, but when I looked him up on IMDB, I was aghast at his resume.

If you’re not familiar with IMDB.com, it’s the database of all movies, tv shows, actors, writers, etc., etc. It’s amazing. I keep an app on my phone to settle arguments.

Everyone knows Tim Curry best as Frank Furter from Rocky Horror Picture Show, the funnest cross-dressing villain ever. And in Clue, his butler Wadsworth kills Mr. Body. (True, it’s only in one of the endings, but it’s the one that counts.)

Now check out the rest of this bizarre filmography:

In the entire 50-year span of his career, I could only find one character who was truly good and wholesome. Nigel from the old Nickelodeon cartoon, The Wild Thornberries. That’s a pretty darn good one, though. It almost redeems him for all the others.

Well, except for Forte. That one should have never existed. (shudder)